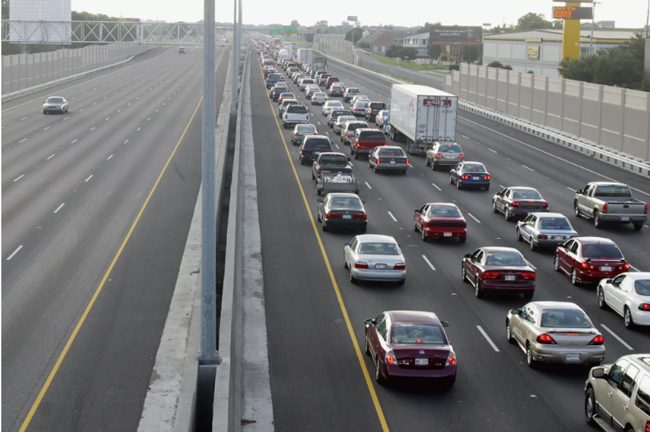 WHY DO TRAFFIC JAMS FORM SOMETIMES EVEN WHEN THERE IS NO ACCIDENT?

If you have ever driven down I-285, GA 400, or any of our Atlanta freeways, you have probably been in one of those “phantom” traffic jams that seem to have no obvious cause. Traffic slows almost to a standstill, and you crawl along for a few minutes before suddenly increasing speed, although there seems to be no accident, lane closure or road works that explains the slow down.

These sudden stops could even be dangerous and cause a real car accident.

Real world experiments and mathematical equations have actually been employed by several research groups in an effort to solve this annoying and frustrating problem. The good news for drivers who are crawling along in traffic for no apparent reason is that they may have come up with the reason as well as a solution.

On a busy and crowded highway, a chain reaction causing traffic to come to a halt can happen with any slight hiccup in the flow of traffic. You have probably experienced this yourself – you brake suddenly if the car in front of you brakes, and of course the driver behind you is probably hitting the brakes too.

Benjamin Seibold is a mathematician at Temple University and he and his colleagues have been researching these traffic jams with no obvious cause. A driver hitting the brakes after being inattentive for a moment, or slowing down for a small bump in the road can cause this domino effect, explains Seibold.

Seibold goes on to explain that this wave of drivers all hitting their brakes for no good reason can go back in to the line of traffic for up to 1000 meters, which can cause these phantom traffic jams. After a few seconds, drivers realize that there is no real need to slow down and everybody gradually picks up their speed again.

This chain reaction is caused by individual drivers, who hit the brakes for the reasons described above. This causes the car behind to slow down, and then the vehicle behind that, causing the frustrating slow down which seems to have no cause. When drivers are driving faster than they need to or above the speed limit, the phenomenon is more likely to occur.

Seibold goes on to point out that drivers can prevent these traffic jams from happening by anticipating denser traffic up ahead of them, leaving more room between them and the car in front, and slowing down in plenty of time.

These phantom traffic jams and slow downs have also been studied by MIT computer expert Berthold Horn. Horn suggests that drivers can help to avoid the need for sudden braking by trying to stay as close to halfway between the car in front and the car behind.

So who’s to blame for these traffic jams?

Unfortunately, it seems as if these phantom traffic jams will always be a part of everyday life, and will always be there if the traffic on a busy road is at a particular volume. However, if enough drivers change the way they drive and apply the brakes, it can reduce the likelihood of them happening.

Seibold also suggests that it isn’t really the fault of an individual driver, in most cases. He goes on to point out that the slow traffic situation can still be created even if every driver on a certain road changes their behavior and nobody brakes too quickly.

Basically, if there are a lot of cars on the same road, these phantom traffic jams are going to occur, regardless, simply because of the way drivers behave and react. It has been suggested that having a robot driver is the only real way of eliminating the problem.

However, there are some solutions. Although most roads are designed to be as straight as possible, designing a road to be as smooth and as straight as it can be will reduce the chance of these slow downs from happening. Some roads in the US already have variable speed limits, mostly to accommodate weather extremes, and this is also seen as an effective way of keeping the traffic moving.

By using LED signs along a stretch of highway to vary the speed limit, the wave of traffic can be more effectively broken up, if drivers slow down gradually over a longer stretch of road, rather than all slow down at the same time.