When Is Drug Possession a Felony in GA? 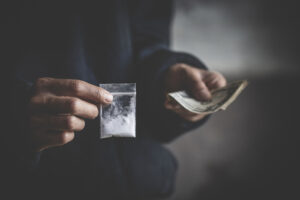 It has been found that Atlanta is a popular hub for several drug cartels. Because of the widespread prevalence of drugs of all types, thousands of residents are arrested each year for drug-related offenses.

Any drug conviction can greatly impact your life now and in the future. Due to the serious consequences you may face, it’s smart to hire an Atlanta criminal defense lawyer from the Law Offices of Matthew C. Hines as soon as possible after being charged with any drug-related crime.

An arrest related to the possession, distribution, use, or other activities related to illegal substances in Georgia may result in state and federal charges. Because of the seriousness of these charges, it’s important to understand your rights, potential penalties, and possible defenses to the charges you face.

Are Drug Possession Charges in Georgia Really That Serious?

If you are arrested for the possession of drugs, it means you will have a negative record. If you are convicted, whether it is a diversion, jury trial, or plea deal, it will result in a criminal record, which follows you for the rest of your life.

The possession of illegal substances in Georgia can result in many different consequences. Some of the main factors that impact your sentence for a drug-related case include the following:

As you can see, multiple factors will impact the potential consequences you face when arrested and charged with a drug crime. This is another important reason for hiring an Atlanta drug crime lawyer.

The Georgia Drug Schedule is what allows possession arrests to be prosecuted in the state.

Drug schedules are established by the DEA (Drug Enforcement Agency). Substances, drugs, and specific chemicals commonly used for making illegal drugs are categorized into five schedules. The classification of each item depends on the acceptable medical use of the drug and the potential it has to cause an addiction.

The drug schedules in place include the following:

A Schedule I substance has no accepted medical use in the country. It is also classified as unsafe for use, even under medical supervision, and has a high potential for abuse.

The substances that are classified in this Schedule of drugs are considered to have a high possibility of abuse, which can cause significant physical or psychological dependence.

Common substances classified as Schedule II include methadone, fentanyl, oxycodone, meperidine, and hydromorphone. Some of the other Schedule II narcotics include hydrocodone, morphine, codeine, and opium.

Some stimulants are classified as Schedule IIN, which include methylphenidate, methamphetamine, and amphetamine.

Common examples of substances in this category include any item with 90 milligrams or less of codeine per dose. The narcotics that are found in this classification include anabolic steroids, ketamine, phendimetrazine, and benzenediamine.

Compared to the other schedules, substances classified under Schedule III have a lower potential for abuse. Examples of Schedule IV substances include temazepam, alprazolam, clonazepam, and diazepam.

The potential for abuse of these substances is significantly lower than the others. Usually, this classification of substances is limited to preparations that contain very low quantities of specific narcotics.

Potential Penalties for Possession of Controlled Substances in Georgia

If you are arrested for possessing illegal drugs in Georgia, you will face felony charges. Some controlled substance cases result in federal drug charges, too.

You will face misdemeanor charges if you possess less than one ounce of marijuana. While a misdemeanor is not as serious as a felony, it can still result in serious fines of up to $1,000 and a year in jail.

If you possess a Schedule I or 2 substance, it is charged as a felony offense, and your sentence may range from two years up to 15 years for a first offense. The penalties are even more severe if you are convicted of a second or subsequent offense.

In the state of Georgia, if you are charged with a first-time offense, you may be allowed to have your charges discharged on the condition that you haven not been convicted of any other drug-related crime.

If these are the charges you face, the court will likely sentence you to probation.

While on probation, if you violate the law in any way, the court will then pursue the full charges you would have faced initially. You may also be required to attend a drug treatment program.

Sometimes, discharges are conditional. For example, you must follow up and show proof that you completed treatment. If you follow the rules that are outlined in your probation, your charges will be dismissed, and you will not have a criminal record.

You need to hire an Atlanta criminal defense attorney for assistance when facing drug possession charges. They know the laws in the state and can help determine the best defense for your situation.

Some potential defense options when facing drug possession charges include the following:

The fourth amendment of the U.S. Constitution outlines how the government can invade a person’s privacy and search their property or person. To legally search someone’s property, the police need probable cause or a court-issued warrant. The search is illegal if one of these two things does not exist. The only time this is not the case is if you give consent to the search.

Additionally, any evidence collected during an illegal search will be thrown out. This means the prosecution will not be able to use it to convict you of the crime you were charged with.

Some people believe that using entrapment as a defense is simple; however, this is not always the case. If a sting operation crosses a line, then the officer must induce the defendant to commit a crime. In this situation, your attorney must show that you would not have committed the crime without pressure from the authorities. However, if the prosecuting attorney can argue that you were predisposed to commit the crime in question, then the entrapment defense strategy will be unsuccessful.

The Drugs Were Planted

When trying to build a strong defense against drug charges, you may claim they were planted on you. However, you must provide proof for this to be a viable defense.

The arresting officer’s testimony will hold a lot of weight in a jury trial. Also, the police officer in question will be raising a defense for themselves to prevent criminal charges from being pressed against them (since planting drugs is a crime in Georgia). Arguing that the drugs were planted on you is risky and hard to prove.

The Drugs Are Missing

It is important to hire an attorney who knows what they are doing, which includes requiring that the prosecution bring the drugs to court.

When this is done, everyone can be certain the drugs are actually drugs and that the amount you were accused of having is accurate. If the drugs can nott be found or if they are missing, the court cannot verify the charges against you.

They Were Someone Else’s Drugs

It may also be possible to claim the drugs belonged to someone else. In Georgia, possession does not always equate to ownership. What it means is that the drugs were in your control.

Sometimes, knowledge is enough to prove this defense. When your attorney raises this defense for your case, they pressure the prosecution to provide proof that you were aware of the presence of the drug or that you had control of them.

Our Legal Team Will Help Protect Your Future

As you can see, any drug charge in Georgia has the possibility of serious consequences and repercussions that can affect you the rest of your life. Whether you are facing misdemeanor or felony charges, you need to contact our office immediately so we can begin investigating the case and gathering evidence to help you achieve the best possible outcome to the charges you face.

There are several ways a drug conviction can impact your life. A few examples include the following:

Along with all the problems described here, if you receive a felony conviction, your education and job opportunities will be significantly limited. Additionally, in the State of Georgia, a felony drug conviction means you will never be eligible for food stamps. While you are on probation or parole for the crime, you will not be able to vote.

When you retain the legal services of the Law Offices of Matthew C. Hines, you get years of experience and expertise helping fight the charges against you. Our legal team will take time to investigate the charges against you and learn all the case facts. We will research the laws that relate to your situation and find any legal theories that may help protect you.

The first step is to get in touch and schedule a free consultation. You can count on us to fight for your rights.

Can I be Fired for a DUI?

What Rights Do You Have at a DUI Checkpoint?